The DeAngelo Williams Foundation is a non-profit organization whose mission is to develop and seek initiatives to support the eradication of breast cancer through preventative care and research. Since its founding in 2006, the foundation has raised an immeasurable amount of awareness and stirred up two-way conversations about breast cancer, on and off the football field. As an example of the former, DeAngelo Williams, the foundation’s founder, posted the video of the NFL’s TV commercial he was featured in for breast cancer awareness month to his Facebook page, and the result was 1.3 million video views, 325k engagements, and 7.4 million impressions.

You may be familiar with the Founder and President of the DWF, DeAngelo Williams, former running back of the Pittsburgh Steelers and the Carolina Panthers, who started The DeAngelo Williams Foundation in honor of his mother and his four aunts that all passed away from breast cancer.  Interestingly, his determination to wear pink for his mother was the inspiration behind the NFL allowing players to wear pink cleats in 2009. This movement lead to many other pink accessories seen in NFL games and today has switched over to encompass each NFL player’s individual passions, My Cleats My Cause. 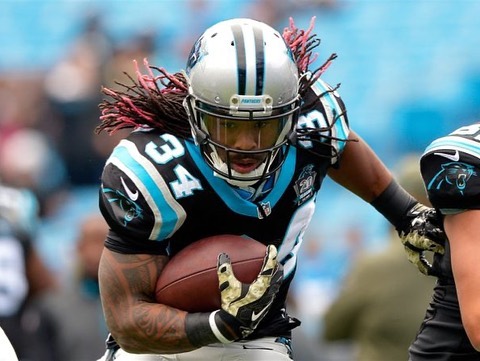 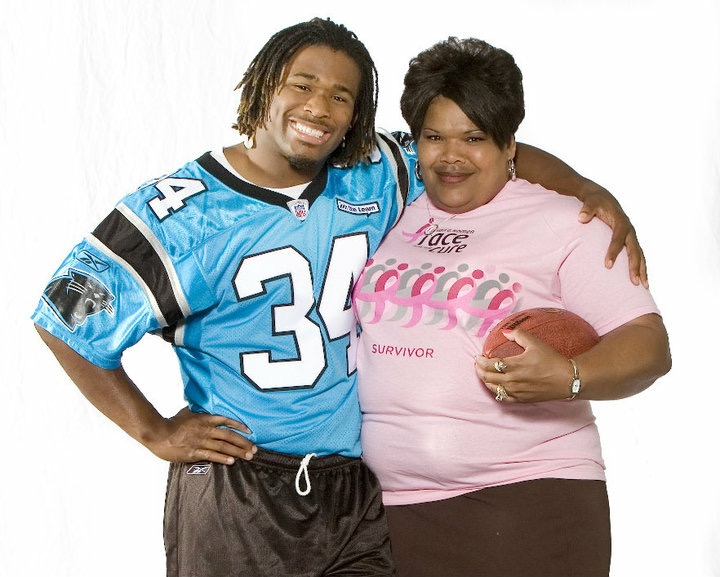 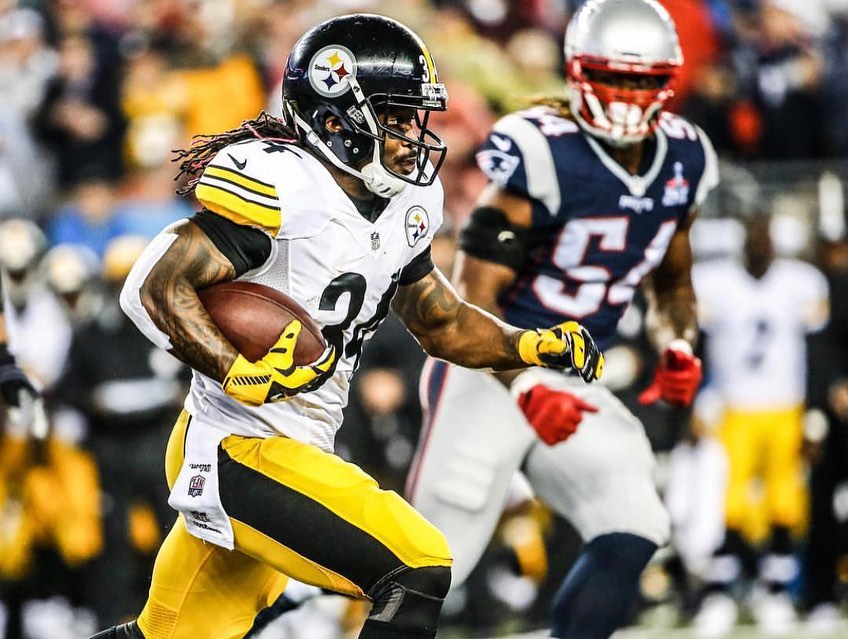 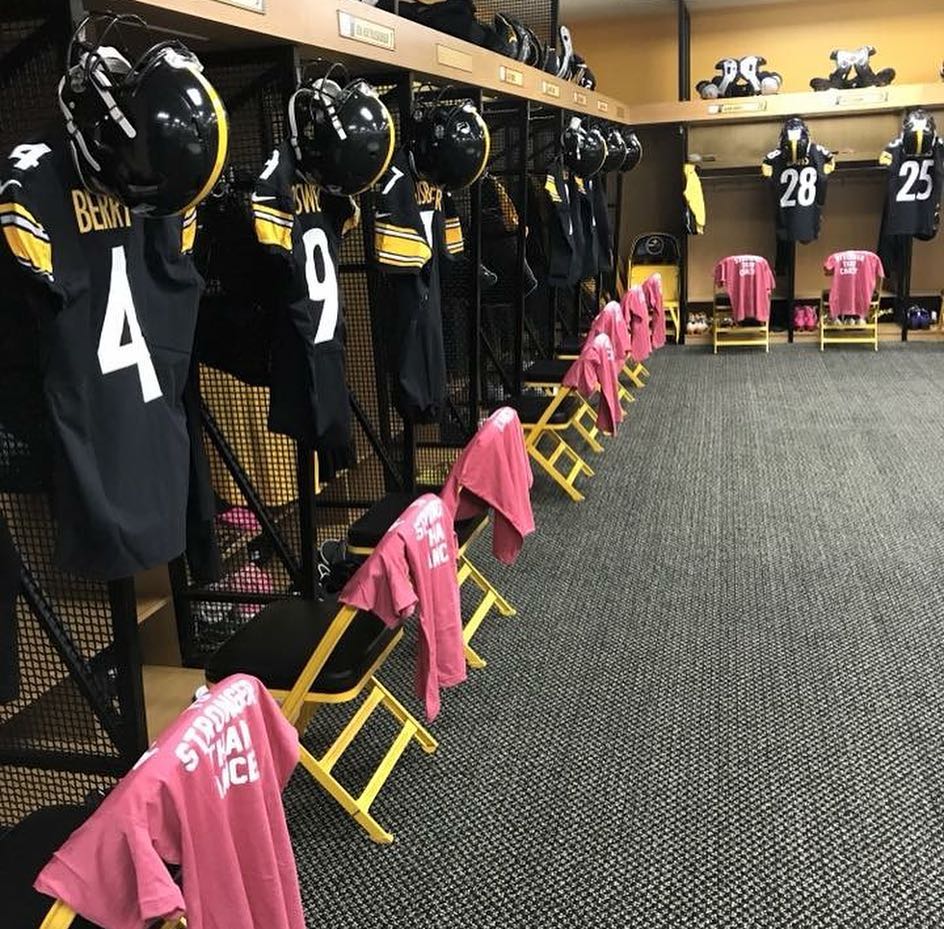 My mom didn’t tell me she had breast cancer before she got a double mastectomy. That was kept a secret, from me at least, because she didn’t want me worrying about her and getting distracted because, well, I’m a mama’s boy.

During the middle of my third season at the University of Memphis, she received a diagnosis that required the removal of her breasts and lymph nodes. The diagnosis was no surprise to her, or the rest of us. Her father had the mutated breast cancer 1 gene and passed it along to his five daughters. My first aunt diagnosed with breast cancer, Linda Faye, died in 1992, at 32. Mamie Earl was my second aunt to pass away from the disease, in 2004, the same year two of her sisters (Mary Beatrice and my mom) found out they had breast cancer. Mary died in ’05. My youngest aunt, Theresa Gaye, died from it three years ago; then my beautiful mom on May 16, 2014.

Breast cancer, whether I like it or not, is part of my family’s story. That’s why I am so passionate about raising awareness, because I have seen firsthand how it can impact others. One time, a lady came up to me and said she was going to get examined just because she saw me wearing pink cleats during a game. I walked away thinking, Wow, pink is really so much more than just a color. It’s a lifesaver. It’s awareness. If we reach one, we reach millions. If we reach millions, we’re doing our job and getting closer to finding a cure.

I remember the summer when my mom finally told me about her diagnosis. I was less than a year away from the NFL. She joked that she elected to have the surgery after the football season because “your offseason is my offseason.” That’s how she was—fiercely protective of me and my interests. After I hurt my ankle during a high school game, my mom ran from the bleachers and “jumped” over the fence (she probably didn’t jump, but that’s the way it was described to me). She was the first person I saw when I got back to the bench, and she said, “What’d they do to my baby!?” To which I said, “Hey, Mama, go back in the stands!”

Sandra Kay Hill is the biggest reason I’ve been able to enjoy eight NFL seasons, going on nine with the Panthers. My two sisters—Kinya, 34, and Garlanda, 26—and I can trace all of our personal and professional successes back to her love and support growing up in Wynne, Arkansas. The byline on this column reads DeAngelo Williams, but these aren’t my words alone. Everything I say here is an extension of her voice, her strength and her courage.

In 2010, six years after doctors told her that the cancer was in remission, it came back the way it’s engineered to do so. She moved into a new home in Wynne with my father as she resolved to fight the cancerous tide all over again. It never went away, but it wasn’t until just a couple of months ago that she began showing signs of getting worse. When she could no longer walk with ease, she had her bed moved from the bedroom to the living room, replacing the couch as the family’s meeting place. Her nephews, nieces and grandchildren all but lived in that bed during visits, crawling over her and laying down to watch movies like Disney’s Frozen. We’d tell the kids to be careful, but she’d just brush us off.

It would be her deathbed. For one of our last conversations, not long before she passed, I wrote down what I wanted to say on a notepad, because I wasn’t sure I’d be able to deliver the words without breaking down. Swollen and emaciated, she looked like a ghost of the woman I had known.

“Mom,” I said, pulling a chair up next to her bed. “I just want to tell you how I feel about you. I’m upset and I don’t know how to take this because I’ve never been in this situation.”

“This is what I want you to remember me by,” she said. “None of your aunties made it to the age of 50 and today I’m 53. I’ve stolen a few years and have enjoyed every minute, especially thanks to those two incredible granddaughters you’ve given me. You and your sisters are safe and know how to maintain and live and survive.

Spontaneously, her words changed my perspective. There I was, upset beyond everything, and she’s never batted an eye, cried or complained. In those last days, when a family member would leave the room to cry, she could hear them around the corner and she would demand that the tears stop.

The challenge my mother laid down: Fight breast cancer for every woman who comes after you, who will suffer as you suffered. God willing, no woman will feel as though she has to face this disease alone.

One day, we will defeat this disease that steals our mothers, our aunts, our sisters, our daughters and our wives before their time. Until then, when we face the last days of our loved ones’ lives, we should do so without fear. And until that final day comes, we have to fight, just as my mom did.

I’ll always remember her smile, which grew wider when her children and grandchildren shared it. That never went away. She never stopped sharing that love. One of my favorite stories about her is one that I recently just heard for the first time. When she passed, I was searching for a place to host her repast. (For those unfamiliar with a repast, it’s where friends and family gathered, ate, and celebrated my mom’s life after her funeral and burial.) One of my friends recommended that I reach out to a woman who books events at this place in Wynne called the Tech Center, which is like a big community center.

I had no idea of this woman’s connection to my mom, but as she gave me a tour of the facility, she told me how my mom had been an inspiration to her, a guiding light in a time of trouble. She explained that she was diagnosed with breast cancer about a year ago, and that she was introduced to my mom via a group text message. She went on to say that my mom walked her through the process in great detail, and on a regular basis. My mom was an expert by then, having watched four sisters pass away. Even though they’d never met in person, she kept in touch with this woman, texting her scriptures and inspirational messages. She had been for this woman the kind of rock she was for all of us, even though her demise was right around the corner.

That’s the challenge my mother laid down for all of us: Don’t just fight this disease for yourself. Fight it for every woman who comes after you, who will suffer as you suffered. God willing, no woman will feel as though she has to face this disease alone.

On Saturday, May 24th, at 3 p.m. CST, we buried my mother at Crosslawn Cemetery in Wynne, Arkansas. My mother’s fight is over now, but mine is just beginning. While I am so thankful for all that goes on during October to raise awareness for breast cancer, I want to ask one small favor of each of you.

First, wear a pink shirt at least once a month, and make it a point to tell people that you’re doing so to help remind everyone that breast cancer awareness is 365 days a year. Second, it’s true that early detection is the best prevention, so please call, text, email, tweet, or Facebook five women you care about (in honor of my mom and her four sisters) and ask them if they’ve gotten a mammogram lately. Do this for five people, and ask them to do it for five more, and then five more after that. Keep it going, and keep doing this for all of the women around the world who live with and die from this disease—and for my mom, who lived to love.

DeAngelo Williams’ mom, Sandra Kay Hill, was the inspiration behind the NFL allowing players to wear pink cleats in 2009. The DeAngelo Williams Foundation is committed to providing free mammograms to women in Charlotte, Memphis, Pittsburgh, and Arkansas—and hopefully throughout the entire country in the near future.

Original article written by DeAngelo Williams with SI.com on May 29, 2014 Wear Pink For My Mom, Who Lived to Love 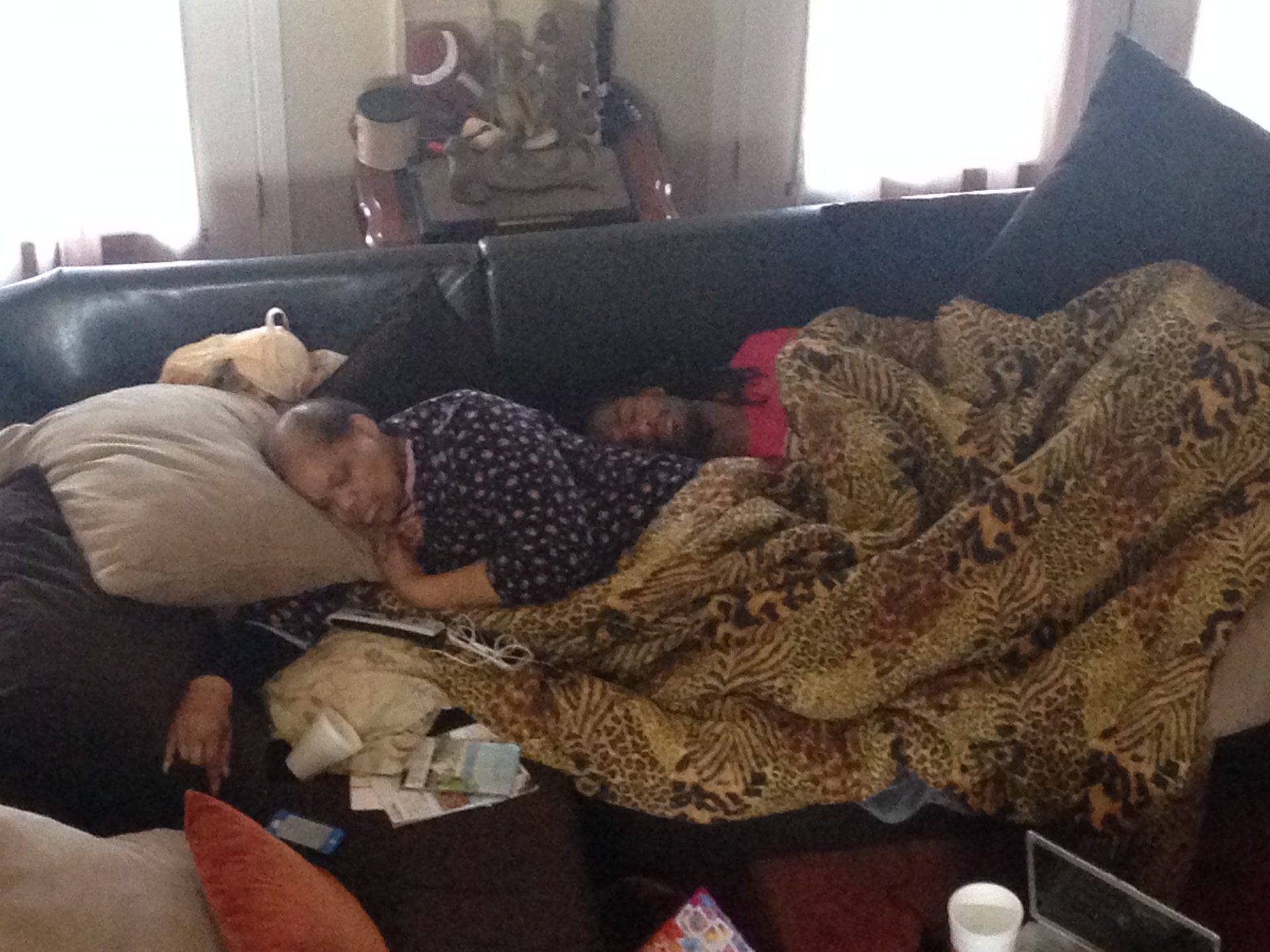 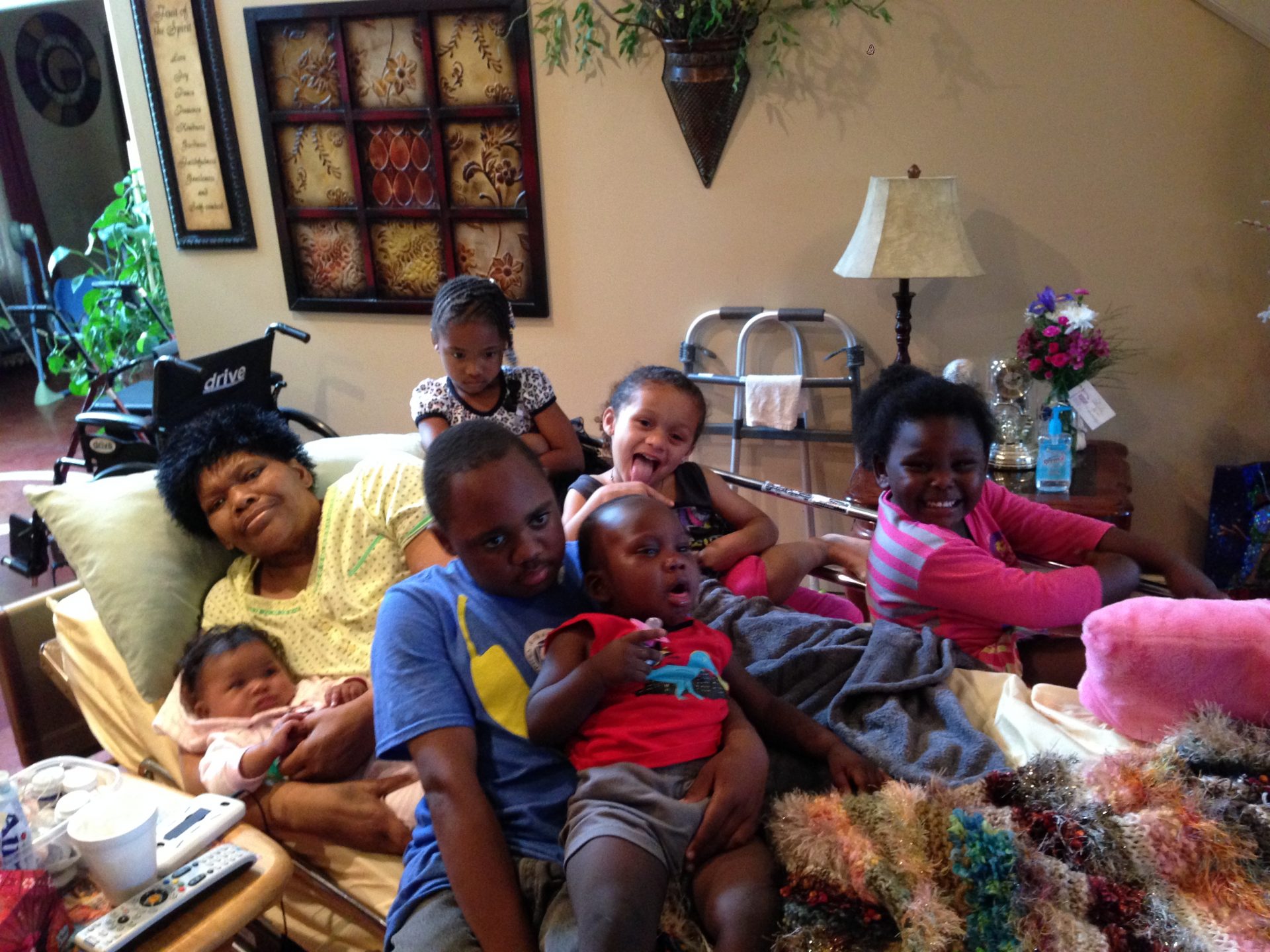 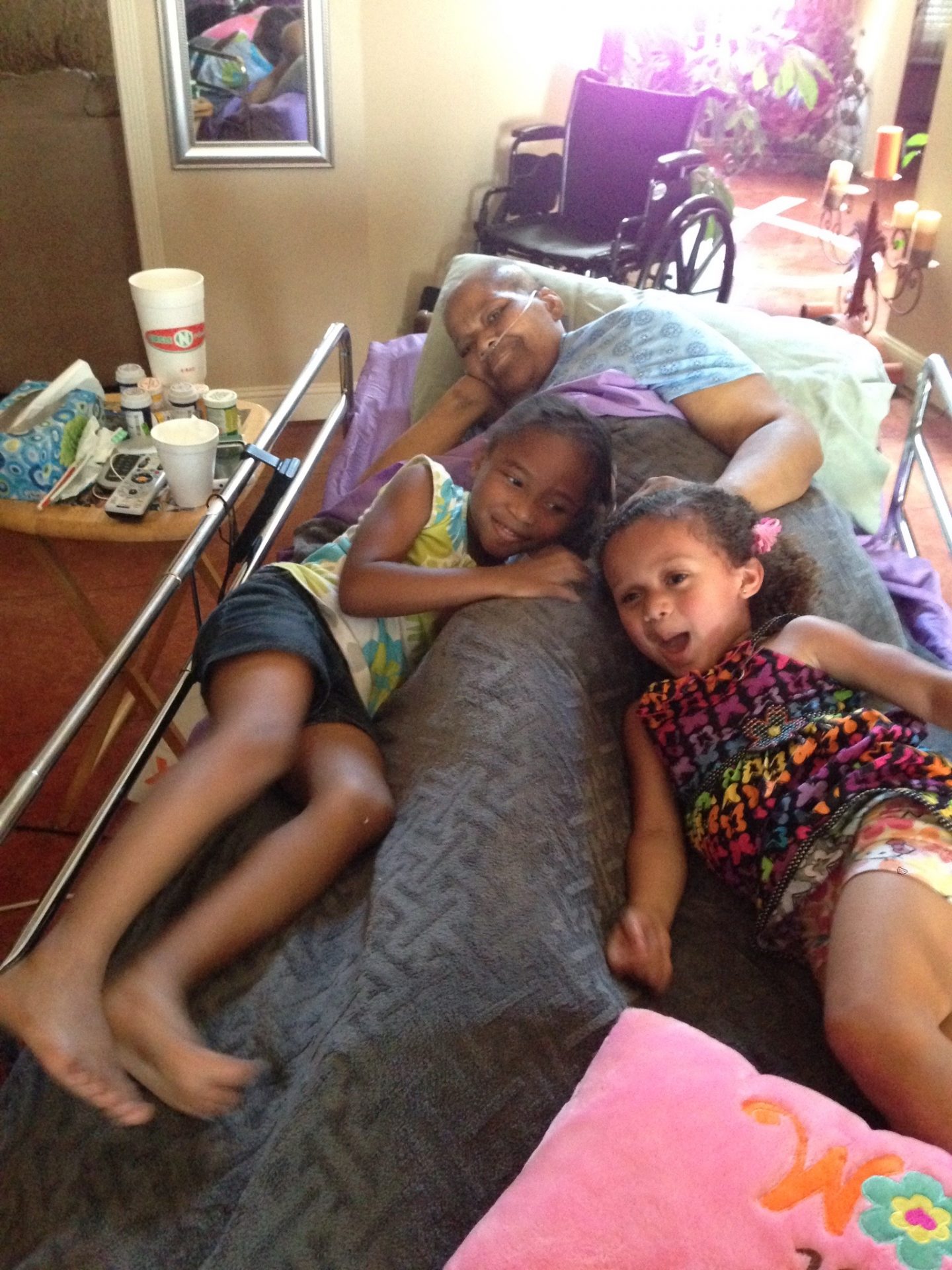 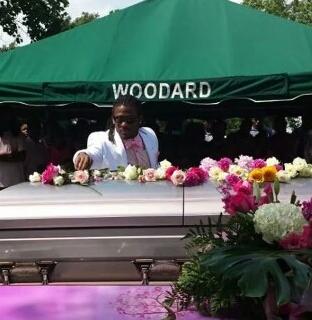 In December 2014, DeAngelo started 53 Strong for Sandra in Charlotte, NC, an initiative in which the DWF funds 53 mammography screenings for women who are uninsured or under-insured. In addition to the screening events, the foundation also covers the cost of follow up appointments and treatments when needed and when cancer is discovered. The number of mammograms provided at each event is a tribute to DeAngelo’s mother, Sandra, who was 53 years old when she passed away.

By 2017 the foundation expanded the outreach of 53 Strong for Sandra by funding mammography screenings for women in Pittsburgh, PA and Memphis, TN while continuing service in Charlotte, NC. In 2019, the DWF took the program to NEA Baptist in Jonesboro, AR where DeAngelo’s mom received treatment while battling breast cancer. To date, the DWF has sponsored nearly 1,000 women’s mammograms. DeAngelo is currently looking to expand to other cities with the ultimate goal of reaching all 50 states. 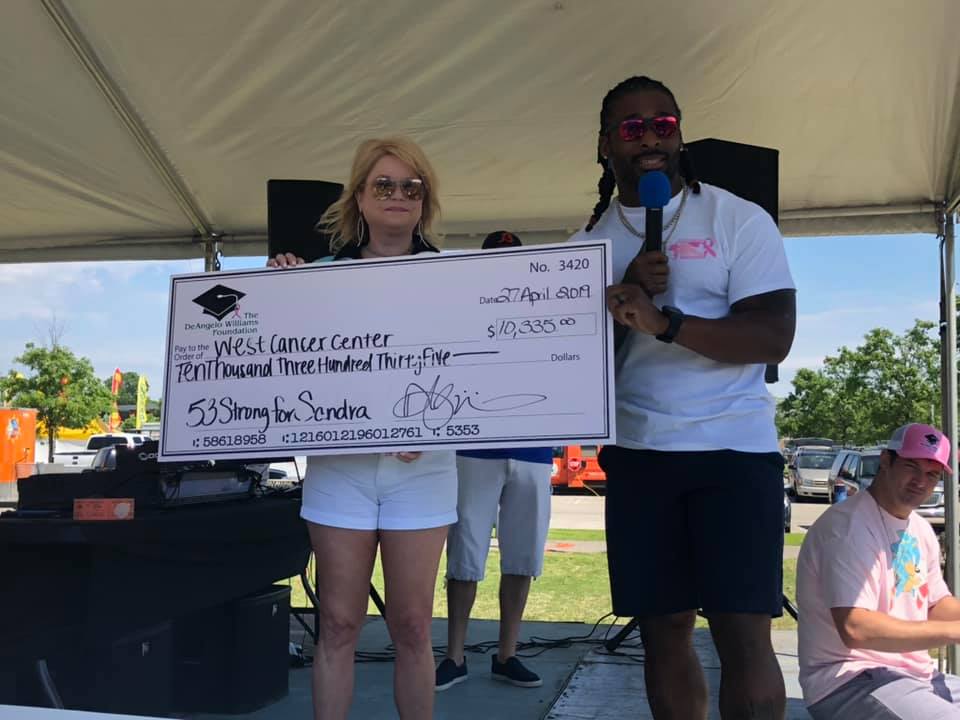 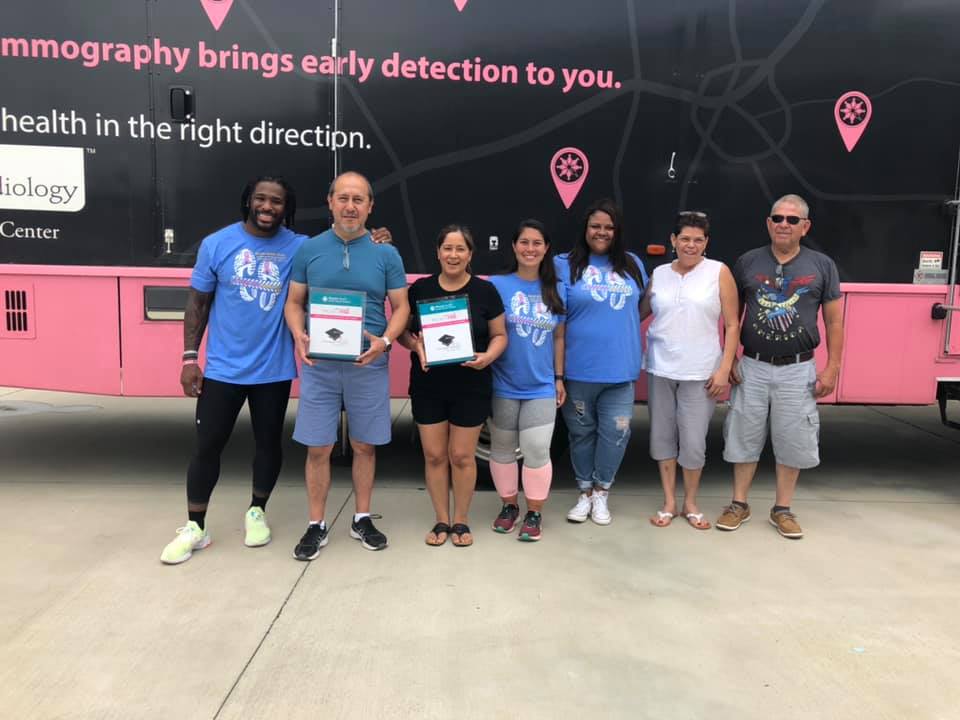 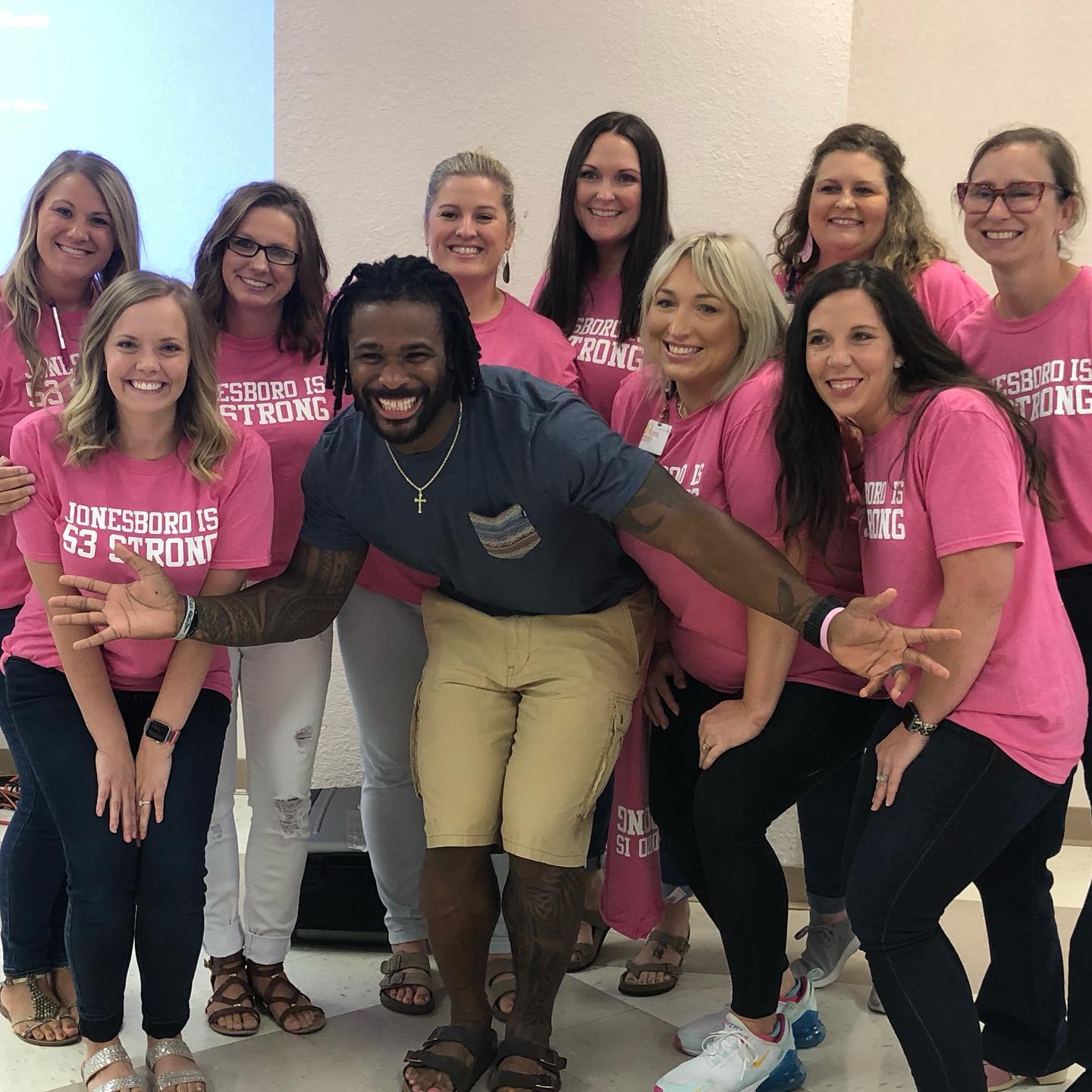 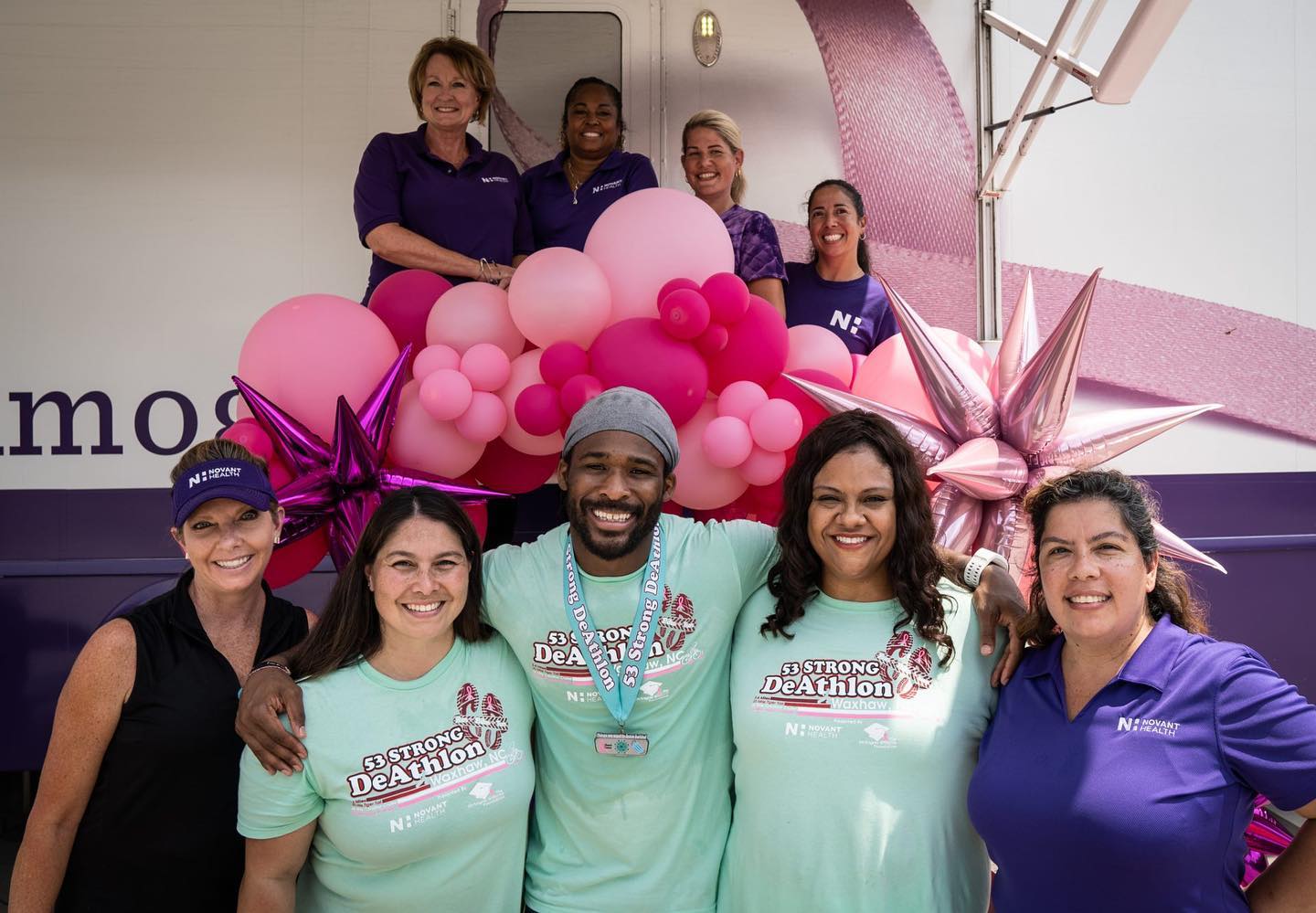 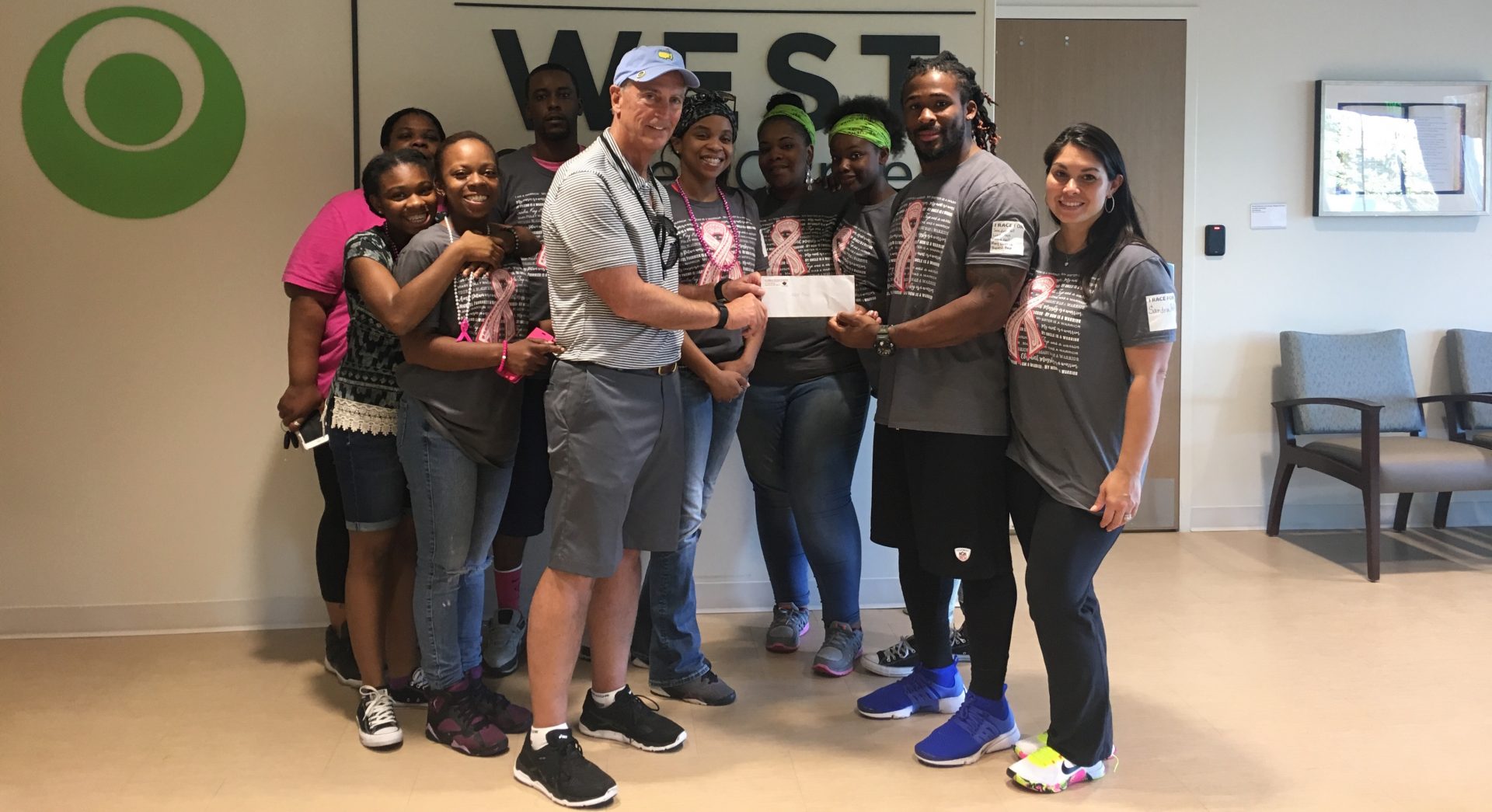 Seeing the incredible financial need for breast cancer patients and survivors, The DeAngelo Williams Foundation created the Smith Sisters Service Grant, named in honor of DeAngelo’s mother and four aunts who all passed away from breast cancer. Through this grant we will be able to help individuals in need of assistance during their battle with breast cancer to unload some of the financial burden on them and their families.

Our first year, we gifted the grant to Go Jen Go, an incredible organization in Charlotte, NC that provides financial assistance to families battling breast cancer. With a total goal of $6,800 we were able to provide 34 survivors with $200 each for critical needs during the holiday season. 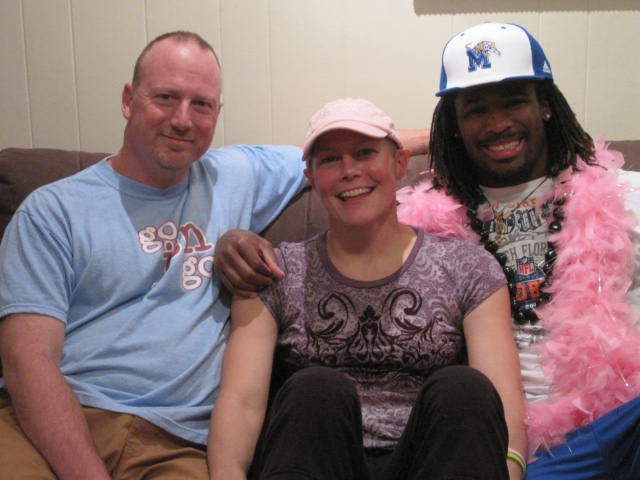 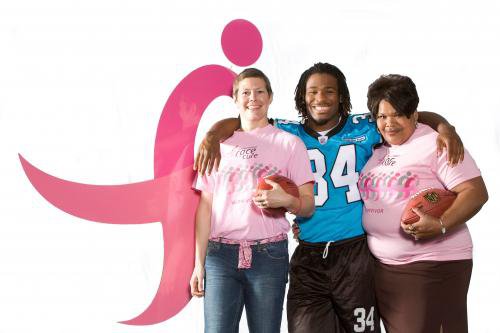 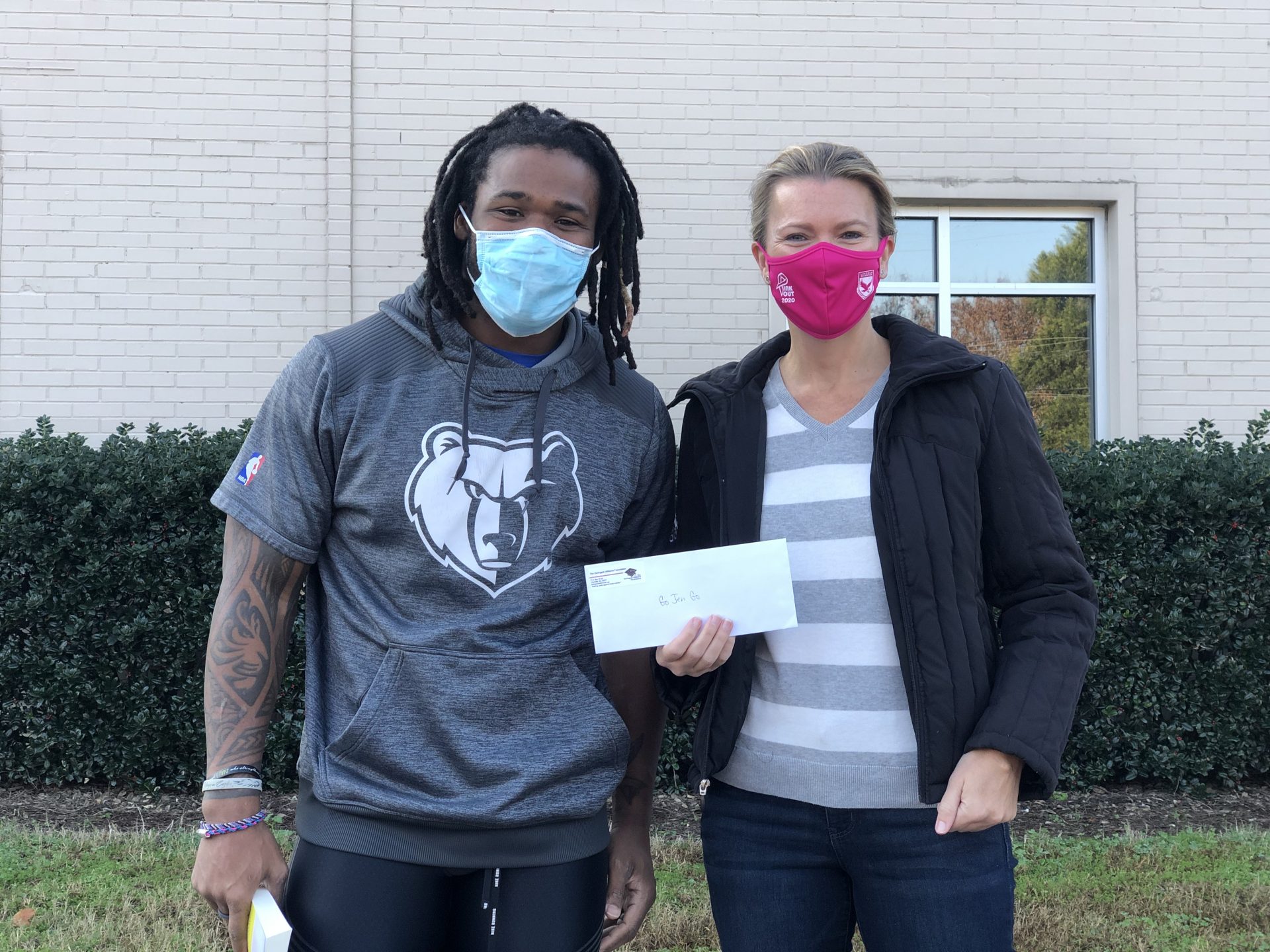 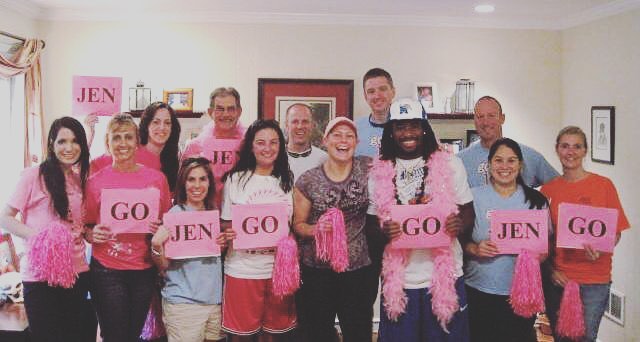